The Sega Genesis, and its blue mascot, was an iconic console of the early 1990s. Sega gave Nintendo a run for their money with the Genesis, and in doing so released multiple different consoles all under the Genesis name. These various consoles also have differing power and audio/video connectors, therefore a common question we hear at VGCables.com is “is this the right product for my Genesis”.

To answer that question let’s look at varieties of Genesis.

When the Sega Genesis launched in North America in 1989 it mostly retained the appearance of its Japanese counterpart the Mega Drive. Genesis consoles are easily identified by their volume sliders, head phone jack, air vents, and raised round “dome” surrounding the cartridge insert.

All model 1 Genesis consoles feature an 8-pin DIN connector for composite video & mono-audio output. Stereo audio is output from the front headphone jack, but for whatever reason Sega choose to include inferior audio on the rear connector.

If this is your Genesis console you’re looking for our Sega Genesis Model 1 Composite Video AV Cable. 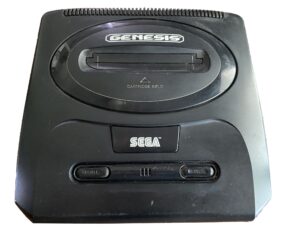 Sega drastically revised their flagship console in 1994 with the release of the slimmer model 2. Model 2 consoles are easily identified by their smaller form factor when compared to the model 1, and their lack of front headphone jack or volume slider. The air vents on the model 2 are also much smaller, moved to the rear of the console.

Overall the model 2 is approximately 60% of its predecessor.

Improvements over the model 1 include the addition of stereo audio output on the now slimmer mini-DIN audio video rear connector.

If this is your Genesis console you’re looking for our Sega Genesis Model 2 Composite Video AV Cable.